In this morning's Breakfast I noted this NYT item:

KEDUNGBENDO, Indonesia, Oct. 5 -- It started as a natural gas well. It has become geysers of mud and water, and in a country plagued by earthquakes, volcanoes and tsunamis another calamity in the making, though this one is largely man-made.

Eight villages are completely or partly submerged, with homes and more than 20 factories buried to the rooftops. Some 13,000 people have been evacuated. The four-lane highway west of here has been cut in two, as has the rail line, dealing a serious blow to the economy of this region in East Java, an area vital to the country's economy. The muck has already inundated an area covering one and a half square miles.

And it shows no signs of stopping. 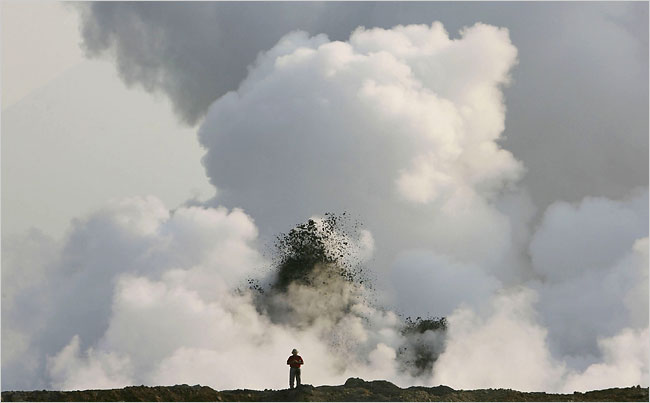 This is an environmental disaster story, complete with a villain (if not a happy ending).

The Sydney Morning Herald contributes further information as to the extent of the disaster:

The estimated damage bill from the mud spill already exceeds $200 million, and experts warn they may not be able to stem the torrent of mud, which has increased to more than 100,000 cubic metres a day.

The Minister for Public Works, Djoko Kirmanto, reading from orders issued by Dr Yudhoyono, said "around 400 hectares of the affected area flooded with mud is now declared a 'disaster area' and not fit for habitation".

Although this event is just now breaking through the global threshold, it has actually been simmering since may. A report by the United Nations Office of Humanitarian Affairs (OCHA) released in July recounts:

Since 29 May 2006, a mud volcano has been emitting `hot mud' in Sidoarjo district in East Java, Indonesia. Mud volcanoes are geological phenomena due to subsurface over-pressurized mud layers. The cause of the eruption has not yet been established. However, it may be linked to the gas exploration activities by Lapindo Brantas at the Panjar Banji I well.

The mud volcano emits mud at an average rate of more than 40,000 m3/day, and has inundated 4 adjacent villages, displacing nearly 7,000 people. Almost 12,000 (accumulative) medical treatments have been carried out, mainly for people affected by the release of hydrogen sulphide gas.

What happened? According to the NYT report, the Indonesian company Lapindo Brantas was drilling for gas in the vicinity of the town of Kedungbendo (at least one report mentions Australian involvement in the project). The company had reached a depth of 9000 feet, and "... continued to drill to this depth even though it had not installed what is known as a casing around the well to the levels required under Indonesian mining regulations, and good mining practices...".

Of course, good practice is expensive.

And what happened next? As the NYT recounts:

The company experienced problems with the drilling that led to a loss of pressure in the well. That is when the mud started seeping in from the sides of the unprotected well bore, at a depth of about 6,000 feet.

The mud was stopped by cement plugs that the company had inserted into the well hole. The mud then sought other avenues of escape, eventually breaking through the earth, and creating mud volcanoes in several places that resemble the geysers of Yellowstone.

And that since May.

Since then, the outlook has become more grim. Attempts to contain the mudflow with earth dikes have failed. The most recent failure left the toll road to Surabaya, the region's main traffic artery, inundated: 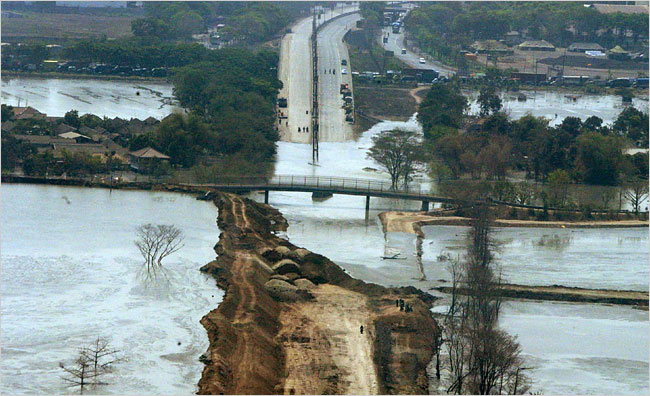 And the rainy season starts in just two months, which will naturally exacerbate the situation.

So apparently the only option left is to divert the mud flow into the Pongo River, which empties into the sea not far from the site.

"It will be the death of the ecosystem around that area," said Amien Widodo, an environmental geologist who teaches at the November 10 Institute of Technology in Surabaya. There is debate whether the mud is toxic. [Australian media are tagging it as definitely toxic. -ed.] But the sheer volume alone will smother just about everything in its path, he said.

And nobody seems to know just how long this can last. One unsubstantiated Indonesian article speculated that the mudflow could go on for 100 years.

And who is the villain of this piece?

According to the NYT, Lapindo Brantas is owned by Aburizal Bakrie, number 6 (with family) on Forbes' Indonesia 40 Richest list (with a net worth of $1.2bn) and currently Indonesia's Coordinating Minister for the Economy (NYT).

So remediation costs and compensation for the displaced population are covered, right? Well...

Last month, Lapindo's parent company announced that it was selling Lapindo for $2 to Lyte Ltd., a company that is registered in the offshore island of Jersey. The majority shareholder in the parent company is the Bakrie Group, and the Bakrie Group is also the sole owner of Lyte, according to public documents. (NYT)

As the NYT so aptly (if obviously notes elsewhere, "Many fear [the company] will declare bankruptcy, allowing its owners to walk away."

Obviously the company claims it exercised due care. However,

Several Western and Indonesian mining engineers spoke about the matter, some offering graphs and mining details that have not been made public, but only on the condition that they not be identified, for fear of running afoul of Mr. Bakrie, the billionaire company owner.(NYT)

Nor are criminal proceedings advancing:

After the first eruptions, in late May, the police in Sidoarjo, the district at the center of the disaster, began an investigation, but it appears to have languished. (NYT)

However, the Sydney Morning Herald reports that: "A police investigation has charged several Lapindo employees with negligence."

So, to sum up, we have a situation where unsustainable, greed-driven exploitation of natural resources (amounting to criminal negligence) on behalf of - ultimately - Indonesia's sixth richest family has produced a chronic ecological disaster that has displaced 13,000 people to date (with the potential for many more) and disrupted the region's economy. Meanwhile, the ultimate beneficiary will, through a combination of influence and Western-style corporate law, be able to shield his assets entirely from the consequences his criminal negligence, leaving the community at large to deal with the consequences.