Yesterday we had the eighth street demonstration against Sarkozy's pension reform particularly and the Sarkozy government in general. In Paris, it was considered a washout, (although there were still some fifty or sixty thousand there) partly due to the weather which was continual rain, and also the fact that the law has passed and the stage will move to the political arena. There is also some bickering among the unions, primarily the CGT and the Force Ouvriere. I understand, however, that there were good crowds in Lyon and Toulouse.

I was home in the country for the weekend but an allergic attack caused an early return to Paris so I stopped at Nation, the terminus of the march, around 5:15. It was almost dark and difficult to take photos,but I managed a few. 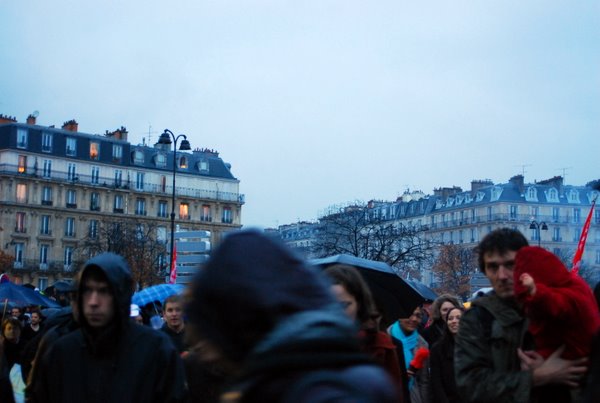 More photos in the comments.

P.S. I'm guessing this will be the last in this series of photo diaries so thanks for looking.