Syria & Antibodies to the US Empire

Burning the Midnight Oil for the Arc of the Sun

Cross-posted from Voices on the Square: refers to earlier essays cross-posted here at The Sunset Empire Shudders and Shakes and Is Syria the Kind Of Place where World Wars Start?. Over the weekend, I saw a piece on Syria: Now hundreds of Syrian rebels defect to Al Qaeda: 'Civil war within the civil war' weakens the battle to topple Assad

At least two entire rebel brigades are said to have joined the Nusra Front in opposition-held Raqqa, which borders Turkey. One of the groups, the Raqqa Revolutionaries, is said to have about 750 fighters.


A video uploaded by activists from Raqqa yesterday showed a massive convoy of fighters on cars and trucks with artillery and machine guns as they waved black flags. The video's title said it was a newly unified force of Nusra fighters and other rebel battalions which had recently pledged loyalty.

Many Syrian rebels are attracted to radical units because they are generally more effective than the moderate forces which have Western backing but receive only halting military aid.

Shockingly, in a confirmation of Candidate Obama's emphasis on the importance of "soft power" and at least implied critique of President Obama's increasing reliance on "hard power", the evolution of a civil war favors increasing polarization and increasing influence by hard-liners on both sides.

'Moderate forces that make up the majority'

I have not quoted from the DailyMail's force assessment, which is that the "moderate forces" make up the majority of Syrian rebel groups, because unsourced assessments of relative strength in five way civil wars are all too often self-serving PR from one or more of the sides. I prefer a sourced force assessment, such as this one sourced to IHS Jane's (UK-based defence analysts):

According to IHS's numbers, Syria's opposition is overrun with extremists and nearly half take up the entire fighting force. Overall, an estimated 100,000 are taking arms against Assad and of that 100,000, there are a reported 10,000 jihadists, which include the foreign fighters. Adding to the extremist factions are 30,000 to 35,000 hard-line Islamists, allied to al-Qaeda.

Taking approximately 100,000, deducting 10,000 jihadists and 30,000-35,000 hard-line Islamists leaves 55,000 to 60,000 "everyone else", including moderate Islamists, fighters from some minority communities, and any secularists who may be in the nationalist opposition:

Together with the 40,000 to 45,000 fueled Islamists are the likely 30,000 moderate rebels, most of which are still aligned with Islamic rule. These numbers would leave estimates very slim in terms of the fighters representing a nationalist Syrian opposition. Shockingly, IHS Jane's study finds that around 1,000 different factions or groups are fighting inside Syria, showing a diverse and wide-ranged opposition to Assad. If anything, groups like al-Nusra are making up the core fight force in Syria.

Another problem Lister evaluates is, "If the West looks as though it is not interested in removing Assad, moderate Islamists are also likely to be pushed further towards extremists." By realizing the majority influence and presence of al-Qaeda-type Islamists in Syria, US officials have both gotten their hands on a sticky situation and also have decisions down the road to make on whether to further deepen their role. If US officials choose to pull out, Lister says the move could turn secularist moderates into extremists.


Antibodies to the US Empire

So, where does this place the Syrian situation in the broader picture sketched in The Sunset Empire Shudders and Shakes and Is Syria the Kind Of Place where World Wars Start??

Step back and consider the Syrian situation from the perspective the fraying American Base Network Empire. One of the explicit challenges to the US Base Network Empire is the so-called "axis of resistance" to US "hegemony", consisting of Iran, Syria and Hezbollah in Lebanon (and previously Hamas in the occupied Palestinian territories). An "Arab Spring" style protest to Assad's rule with its rampant corruption and cronyism rises up.

However, resistance to the US Base Network Empire in Syria is not limited to just Assad. Indeed, part of the reason that Assad adopted his anti-American Imperialism stance is because of its popularity in the wider Arab world, which was particularly important as a member of a minority Shia sect in a majority Sunni country with substantial religio-ethnic complexity, an anti-American, anti-Israeli stance conferred additional legitimacy to his regime.

And so the US is in a quandry. There is no guarantee that pro-Western forces will win the second stage of a multi-sided Civil War in which the first stage is the overthrow of Assad. No matter who succeeds in overthrowing Assad, given the variety of ethnic Arab Sunni groups, it is quite possible that the final victor will be the radical Islamists that possess an ideology capable of overcoming internal ethnic divisions.

That possibility gives the US an incentive to not go all-in in support of the nationalist front side of the Syrian Civil War.

But not going all-in has its own costs, since the supporters of the radical Sunni Islamists have no incentive for restraint, as Fox News reports:

Syrian rebels have a new source of weapons and cash from inside Kuwait, and their benefactors in the oil-rich state are sending the aid to the most militant and anti-West factions involved in the fight to topple Bashar al-Assad.


The role of Saudi and Qatari governments and individuals in the funding and arming of Islamist fighters in Syria has been well known since the civil war began more than two years ago. But now, guns and money are flowing from private sources and Salafist-controlled NGOs based in Kuwait, and they are going to rebel factions aligned with Al Qaeda.


"We are collecting money to buy all these weapons, so that our brothers will be victorious," hard-core Sunni Islamist Sheikh Shafi' Al-Ajami announced on Kuwaiti television last month, listing the black-market prices of weapons, including heat-seeking missiles, anti-aircraft guns and rocket-propelled grenades.

Since this is from Fox News, we can all speculate exactly which interest group among the US radical reactionary coalition is being served by highlighting this information, but my focus is on the strategic challenge itself. And the challenge is clear from the plausible outcomes of the conflict:


The fundamental reason there are no good outcomes for the American Base Network Empire Project is that we have been pursuing this project for quite a long time now, and maintenance of the status quo now requires the frustration of the aspirations of an ever growing number of organized groups in various regions throughout the world.

Hence the confusion of the current Administration in its policy to Syria. There is no good answer, given a commitment to the Base Network Empire project, only a choice among a range of bad answers.


What Wrong Answer Do You Give when there are No Right Answers? 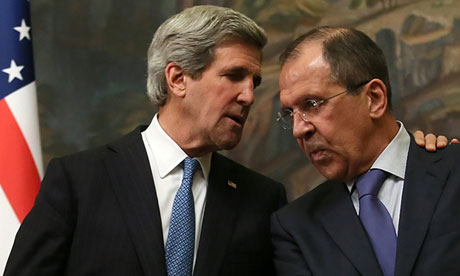 The fact that there are no "good answers" to present makes the question of "who has the President's ear" critical. Daily Beast: Susan Rice and John Kerry Will Battle For Obama's Ear (6 June 2013):

Now, Rice will be in a position to supervise Kerry. Although the secretary of State is a cabinet-level official and the national security adviser is just a White House staffer, in the Obama administration the latter job has carried more weight and arguably more influence.


"During the Bush years, Democrats came up with concepts like `smart power' to harness all of the tools of American power--political, diplomatic, economic-- and not just the military. A key element was to empower the State Department which was massively overshadowed by the Pentagon," said Thomas Wright, a scholar at the Brookings Institution. "For better or worse, the Obama administration has killed smart power. Its chosen concept is central power--the idea that everything flows to and from the National Security Council."

Indeed, this context yields an additional interpretation of the events of 9 September, characterized in many quarters as an "accidental" success, such as this description in Slate:

For a brief period this morning it appeared as though Kerry's off-the-cuff hypothetical would largely remain overshadowed by his curious decision to call any American-led attack "unbelievably small." But that changed this afternoon once Assad and his strongest ally, Russia, caught everyone off guard by suggesting that Kerry's ad-libbed solution was actually workable.

Under this interpretation, the "off the cuff" remark was, instead, a move by Kerry responding to being frozen out by Rice, using his personal relationship with the Russian foreign minister to execute the end-run and his reputation for verbal gaffes as his cover story for bucking White House system in which "everything flows to and from the National Security Council".

However, whether it was an accident, or an experience politician successfully outmaneuvering the war-mongers in control in the White House, the problematic remains.

I argue that a system where the central authority that has to be tricked into taking the action that is least corrosive to its long term viability is a system in decline.

Hiding behind a sofa: European hypocrisy

Outcry for Genocide Should Be Universal

Hiding behind a sofa: European hypocrisy

CIA Is Back: East-West Tensions In Europe

Community Spirit, Solidarity to Save Our Planet

Time for Unionists to grow up