This morning I made the mistake to turn the radio on while attending to my daughter (milk, nappies, kisses and clothing before bringing her to her gardian for the day) only to find what could only be described as the danger of drug use while attempting to make VSP's predictions.

The radio program usually invites a prominent specialist of some thematics that are discussed during the next hour and a half, with interruptions for news, editorials and so on...

Today's guest was M. Nicolas Baverez, whose talent as a jester is, I believe, quite underrated.

I copied and translated below the pitch of today's broadcast:

We are in 2040. France is on the verge of bankruptcy. The Unesco headquarters left Paris for Berlin. Airbus has even abandoned his siege of Toulouse in favor of Hamburg. After being saved by Europe and Germany in 2025 , the country plunged into bankruptcy. 65% of young people are unemployed , the franc has lost 80 % of its value and the political institutions of the Sixth Republic can do nothing . It is a Beninese, Alassane Bono , the first African to head the IMF , who heads the mission that supposedly will be saving France . This could be the scenario of a hollywodian blockbuster or a fiction film awarded at Cesars. For now, this is the semi- fiction invented by Nicolas Baverez in his latest book , Beninian Letters ( Albin Michel , 2014).

At a time when the poverty rate in France exceeds 14.3 % ( or 8.7 million people affected ), where distrust of institutions grows, and where anger is expressed every day a little more , let us ask theses questions: what will become of France ? Are we on the brink ? We are in decline, and if so, is it serious? In response, I received this morning Nicolas Baverez . Nicolas Baverez Hello , you 're an economist and historian ...

...and, if I may also add, clearly high on LSD at the time of writing.

Let's remind our casual readers that France has lived, since 1812, through 1830's and 1848's revolutions, the second Empire, loss of 1870'war against Germany and annexion of two departements, the first and the second world war without ever defaulting on its debt. 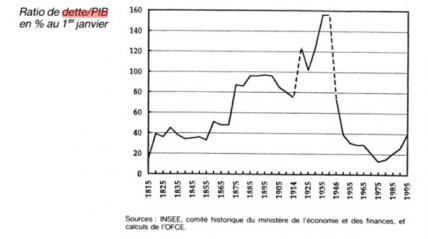 So tell me: what, in the coming 30 years, could be worse than the 1.6 millions deaths of the first world war, the 550 000 more of the second world war, the loss of Algeria and the arrival of around 1 million wealthless refugees after independance in 1962? Nuclear war?

I'm aghast at the idea!