The government has indicated that it will use this Constitutional Amendment liberalization to legislate for the automatic recognition of foreign divorces and the reduction of the waiting period for a divorce application to succeed from four years to two years of separation.

The early indications are for a surge in the Green Party vote, a near humiliation for the anti-emigration candidate, Peter Casey, in the European elections, and a disappointing performance for Leo Varadker's ruling Fine Gael Party (relative to earlier opinion polls). More left wing candidates and parties have generally performed well - though not the establishment Labour Party.

Overall, therefore, it looks like Ireland is continuing its liberalizing trend, in sharp contrast to the right wing nationalist trends in the UK and in some other parts of Europe. I will update this story as more results and hard data comes in... 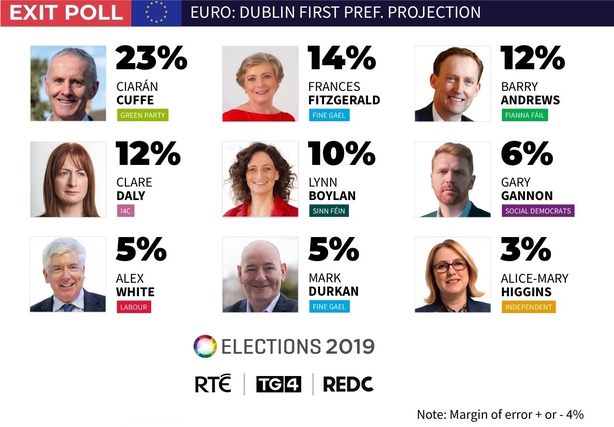 Based on these exit poll projections I would Expect Ciaran Cuffe (Green), Frances Fitzgerald (Fine Gael) and the left wing Clare Daly (Independents4Change) to be elected with Barry Andrews (Fianna Fail) joining them if/when Brexit happens. Clare Daly is likely to get more lower preference from eliminated left wing candidates to claim the third seat. Sinn Fein tends not to get as many lower preference transfer votes and so the sole incumbent standing, Lynn Boylan (Sinn Fein) is likely to lose her seat. A net gain, therefore for a Green candidate from the incumbent (not running) Nessa Childers who was an Independent with Labour and Green roots; and for a left wing candidate (Clare Daly) from a left/nationalist Sinn Fein candidate; with Fine Gael retaining their seat... 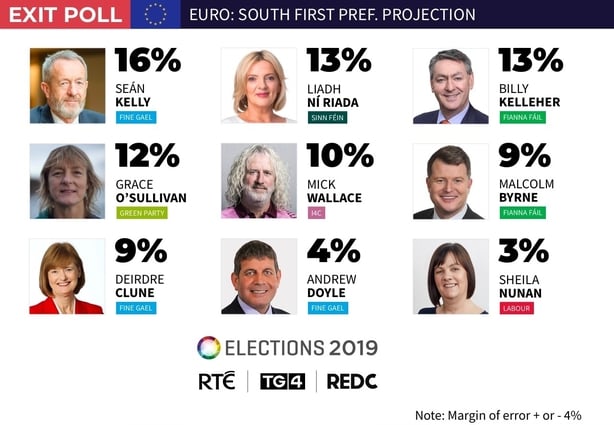 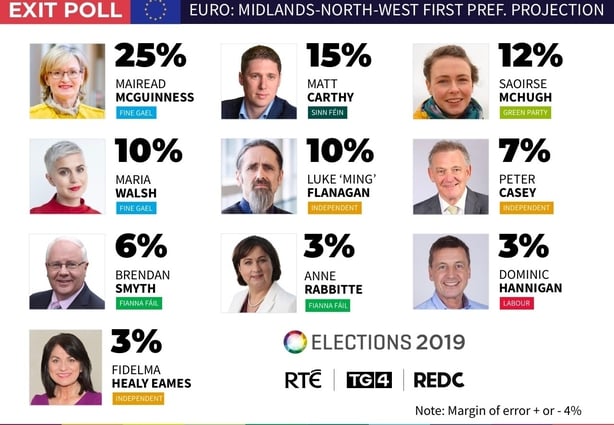 European Parliament Senior Vice President and Fine Gael candidate Mairead McGuinness looks set to be the runaway winner here with well over the 20% quota required for election on the first count. Matt Carty (SF) is probably close enough to the quota to gain re-election on a reduced vote despite Sinn Fein not being as transfer friendly as some other parties. Saoirse McHugh of the Greens could be the chief beneficiaries of such transfers and could win the third seat. She was the star performer in the TV debate where she told anti-immigration candidate, Peter Casey, that "Millionaires blaming migrants is an old trope and it's boring," and that he should "Go on Dancing With The Stars if you want attention that much, Peter."

Peter Casey, who came second in the Presidential Election by weaponizing the anti-immigrant and anti-Traveling Community vote is a no-hoper on 7% of the vote. The last seat is likely to be between incumbent independent Luke 'Ming' Flanagan and Fine Fael's second candidate, Maria Walsh, who should benefit from transfers from Mairead McGuinness's surplus over the quota. Fianna Fail, on the other hand, look like being humiliated with only 9% of first preference between their two candidates, although they could benefit from Peter Casey's transfers.

The exit poll (MoE 4%) projects the following votes for the major party groupings:

Basically the Greens have quadrupled their vote at the expense of just about everyone else.

Other issues polled in Exit Poll

The Exit poll (taken exclusively from voters leaving polling stations) also asked questions on a number of other issues:

by Frank Schnittger - May 20
18 comments

The Primacy of EU law

by Frank Schnittger - May 25

by Frank Schnittger - May 15
38 comments

Sacrificing Lives to Save Capital

The Primacy of EU law

by Frank Schnittger - May 25

by Frank Schnittger - May 20
18 comments

by Frank Schnittger - May 15
38 comments

Sacrificing Lives to Save Capital

COVID19 and Energy: What McKinsey Thinks

The Joys of Spring

by Frank Schnittger - May 4
13 comments

Intervention US Election 2016 ... Not Russia