"The courage and common sense
of a minority of senators will be cold
comfort to the millions of Yemenis
struggling to survive without adequate
food or health services amidst daily
bombing and shelling."
--Ray Offenheiser, Oxfam America

○ Drone Strikes Cause Fierce Blowback In Yemen by Oui @EuroTrib on Aug. 11, 2013

United States Vice President Joe Biden conducted a two-day visit to the UAE, which underscored the strong bilateral relationship between the two countries. During the visit, the US Vice President called the bond between the UAE and US "one of the most significant in the region" and highlighted the UAE's role in the fight against ISIL and extremism.

The Vice President thanked the Crown Prince for the UAE's generous humanitarian support to Syria and contribution to the international stabilization fund for Iraq. The Vice President encouraged increased UAE and GCC assistance to Iraqi communities liberated from ISIL.

Vice President Biden visited US and coalition troops at Al Dhafra Air Base, as well as the Sheikh Zayed Grand Mosque and Masdar. He also met with His Highness Sheikh Mohamed bin Zayed Al Nahyan, Crown Prince of Abu Dhabi, to further discuss continued security and economic cooperation between the UAE and US. The UAE is also one of the United States' strongest trading partners, with bilateral trade surpassing $25 billion in 2015.

17 points of impact. No Drones or missiles were detected/intercepted. Saudis & Americans still at loss as to where the attack was launched from.#KSA seriously needs to shop elsewhere & replace the Patriot or reinforce it with a web of radar operated AA guns like the Oerlikon. (_link)

In analysis too sophisticated to be implemented by Houthi rebels ... other source from inside or outside the Saudi Kingdom.

Yemen's Houthi militia launched a terror attack on the Shaybah oil field in eastern Saudi Arabia causing a "limited" fire at a gas plant. The attack had no impact on oil production or exports, Khalid Bin Abdulaziz Al-Falih, minister of energy, industry and mineral resources said in a statement. Al-Falih further said that at 6.20 a.m. Saturday, one of the units of Shaybah NGL facility was subject to an explosive-carrying drone attack, resulting in a limited fire that was controlled. There were no casualties.

A statement by Saudi Aramco on its website said, "Saudi Aramco's response team controlled a limited fire this morning at the Shaybah NGL facility. There were no injuries and no interruptions to Saudi Aramco's oil operations." 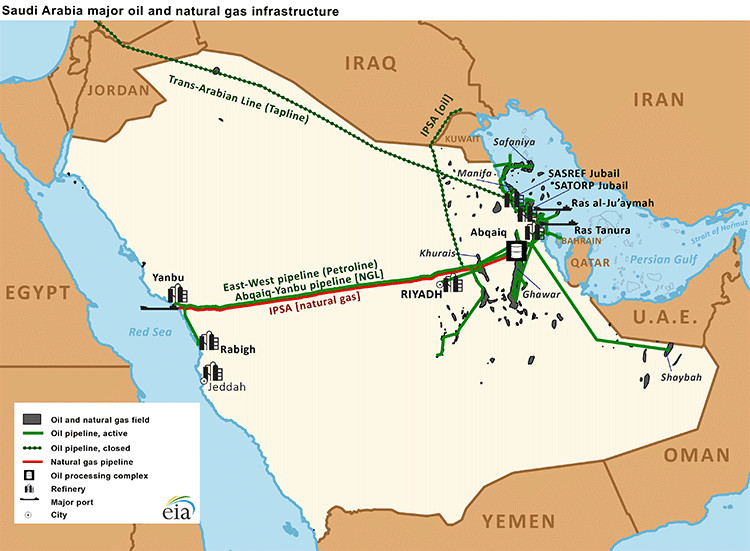 Meanwhile, Al-Falih stressed in his statement that oil production and exports have not been affected by the terrorist attack.

He asserted the Kingdom's strong condemnation of the cowardly attack, stressing that this act of sabotage and terror is nothing but an extension of the acts that recently targeted the international oil supply chains, including the oil pipelines in the Kingdom, oil tankers in the Arabian Gulf and others.

This targeting of vital installations, is not targeting the Kingdom alone but the security of global energy supplies as well. Therefore, it is a threat to the global economy. This cowardly attack highlights once again the importance of the international community to repulse all terrorist quarters that carry out such acts of sabotage, including the Iran-backed Houthi militias in Yemen.

The southern separatists' takeover of Aden, the interim seat of Yemen's government, could leave Saudi Arabia struggling to hold together a military coalition fighting the Iran-aligned Houthis.

It also risks fragmenting southern Yemen as the United Nations struggles to restart talks to end the 4-1/2-year war that has pushed millions to the brink of famine.

Separatists, who want to split from the north and are backed by the United Arab Emirates, effectively seized Aden by taking over the government's military bases after they accused a party allied to President Abd-Rabbu Mansour Hadi of complicity in a Houthi missile attack on their forces.

The Saudi-led coalition backing Yemen's government hit back, saying it attacked one target, after threatening to act if southern forces do not cease fighting.

The two sides had been nominally allied in the coalition fighting the Houthis, who ousted Hadi's government from the capital Sanaa in 2014, but they have rival agendas.

Saudi Arabia is struggling to hold together a military coalition fighting Iran-aligned Houthis in Yemen after local allies turned on each other in a power struggle that has strained Riyadh's alliance with its main regional partner, the United Arab Emirates.

The UAE, the second power in the coalition, has openly intervened on behalf of southern separatists battling the Saudi-backed government for control of the south, launching air strikes on government forces trying to regain their interim seat of power in Aden port.

The escalation risks further fracturing the Saudi-UAE alliance and emboldening the Houthi movement, which the coalition was formed to fight. The United Nations is trying to restart talks to end the 4-1/2 year conflict, largely seen as a proxy war between rival powers Saudi Arabia and Iran.

Saudi Arabia and the UAE called for talks to resolve the crisis. Hadi's government insisted that separatists first cede control and that the UAE stop supporting southern fighters it has armed and trained.

The separatist Southern Transitional Council (STC) said it would not withdraw until the Islamist Islah party and northerners are removed from power in the south.

STC fighters tried extending their reach in the south but were repelled by government forces. Those forces tried to retake Aden but retreated when UAE warplanes attacked them. Abu Dhabi said it targeted "terrorist organizations". 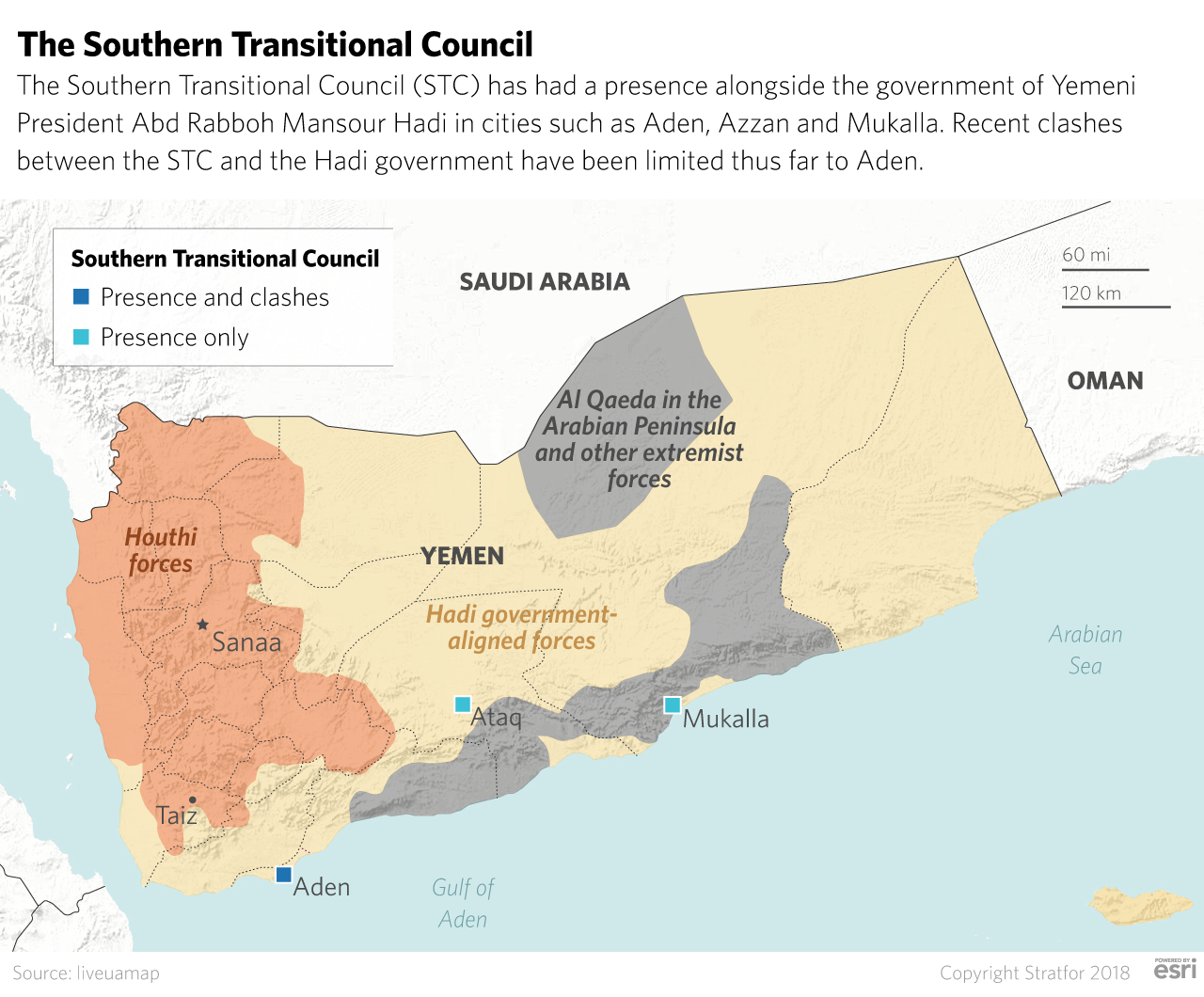 Running again and leading the pack ...

○ The Biden Agenda: Reckoning with Ukraine and Iraq, and keeping an eye on 2016 | The New Yorker - July 2014 |
○ Ukraine-Russia Proxy War and the U.S. Election