The narcissism of minor differences

An Taoiseach Leo Varadker has called a general election in Ireland for February 8th. - in the immediate wake of Brexit actually happening at the end of January and the devolved institutions being restored in N. Ireland following an agreement between the N. Ireland parties and the British and Irish governments.

The timing is significant for a number of reasons. Fine Gael's slim Dail majority had become increasingly precarious as the "confidence and supply" agreement with Fianna Fail had faltered and as various independent and other TD's threatened to withdraw their support. A no-confidence motion in Health Minister Simon Harris could well have been carried and would have further high-lighted the governments greatest failing while in office.

Leo Varadker and deputy prime Minister (Tanaiste) Simon Coveney are widely seen as having done a good job on Brexit and so it was in their interest to hold the election while Brexit was still high on the news and political agenda. When the two governments and the N. Ireland parties finally agreed to the restoration of the N. I. Assembly and Executive after a 3 year hiatus, another important item on the Government's to do list was ticked off.

That said, a win for Leo Varadker and Fine Gael is anything but a done deal. Fine Gael have led the government for almost exactly nine years since 2011 and it is rare for any Irish government to win 3 elections in a row. There is considerable yearning for change in the country, despite full employment, the economy growing at c. 5% p.a., and the government actually running a surplus. Failures in public housing, healthcare, and transport policy have sapped the electorate's patience and homelessness, rapid housing rent increases, hospital waiting lists and impossible commuting times are likely to figure prominently in the campaign.

The problem the electorate faces is the lack of credible alternative options. Fianna Fail, the largest opposition party is still tainted by the memory of having run the country into the ground in the 2008-12 crash and its leader, Michael Martin, was a prominent minister in that disastrous government. In contrast, Fine Gael can claim to have turned the economy around with tangible benefits for the electorate in terms of GDP growth and employment with the unemployment rate declining from a peak of 16% in 2012 to 4.8% now:

Average hourly earnings have also shown a steady if irregular rise in recent years despite the threat of Brexit and a slowdown in the European and World economy:

Although Fine Gael is often derided as a centre right party of the propertied and professional classes, the GINI index for Ireland has actually declined in recent years and the taxation system is relatively progressive and redistributive in its effects:

Ireland GINI index: The lower the number, the less the level of income inequality

This places Ireland roughly halfway on a table of income inequality in EU countries and slightly better than the EU average.

The government debt/GDP ration has almost halved in the last 7 years from 120% to c. 60% although this figure has been distorted by the global multinationals relocating intellectual property to Ireland and booking sales in other countries to their Irish subsidiaries thereby grossly inflating our GDP numbers.

But eaten bread is soon forgotten and elections are usually fought and won on what parties are promising to do in the future rather than what they did in the past and with aspirations, promises and rhetoric trumping the harsh realities of what the parties will actually do once in office.

Nine years in power have also seen an accumulation of government failures which are more likely to be highlighted during the campaign. These failures include a growing problem of homelessness, the treatment of refugees, a failure to ensure sufficient provision of both rental accommodation and new housing for sale, poor planning resulting in massive congestion of Dublin, in particular, the failure to ensure value for money in the health budget and the capital cost of the new children's hospital in Dublin which has doubled from 0.9 to 1.7 Billion in the last two years.

But the government also suffers from some emotional political problems: a perception that Varadker and co. represent the Dublin professional elite and are insensitive to the concerns of poorer and rural voters. A perception that they have grown arrogant and tired in office and have run out of ideas. A perception that they are ideologically wedded to the idea of a free market which has demonstrably failed to address social needs in the housing sector, in particular.

But if not Fine Gael or Fianna Fail, who can the voters turn to? Sinn Féin have been losing ground because of their failure to represent Ireland's interests on Brexit at Westminster and failure to get the devolved institutions in N. Ireland working again. This weeks agreement to restore the institutions should address that latter concern, but Varadker and Coveney will try to garner the lions share of the credit for that. Most parties will also continue to refuse to form a coalition with Sinn Fein because of that party's relatively recent association with violence in both N. Ireland and the Republic.

The Labour Party has suffered from the malaise of nearly all social democratic parties in Europe, a perception that they represent mainly secure and well remunerated employees in the public service, and the sense that their social liberal agenda has been hijacked by Fine Gael. There is little there to enthuse younger voters in less secure employments.

The Greens have seen an uptick in their electoral performances of late, but are still handicapped by their participation as a junior partner in the last, disastrous Fianna Fail Government. The rise of climate change awareness and activism should see their electoral performance continue to improve and they are seen as potential coalition partners for both Fine Gael and Fianna Fail - both of whom are trying to hijack the green agenda for themselves.

In the past two general elections the electorate have tended to pronounce "a plague on all your houses" and voted in large numbers for a plethora of independents campaigning primarily on populist and local constituency issues. It is not clear, as yet, to what extent voters will prioritise local issues or instead vote to form a viable government with a clear policy agenda.

The macro issues of Brexit, global corporate tax reform, climate change and the disintegration of the global order created by "western" dominance since the Second World War will impact hugely on Ireland in the next few years, but it is not yet clear to what extent most voters will take these issues into account when casting their ballots.

Opinion polling prior to an election actually being called can be notoriously unreliable but for what its worth most recent polls have had Fine Gael and Fianna Fail more or less neck and neck but polling only a combined 50% plus of the vote, with Sinn Fein polling around 15% and a host of minor parties (mostly on the left) and independents polling around 30% of the vote. 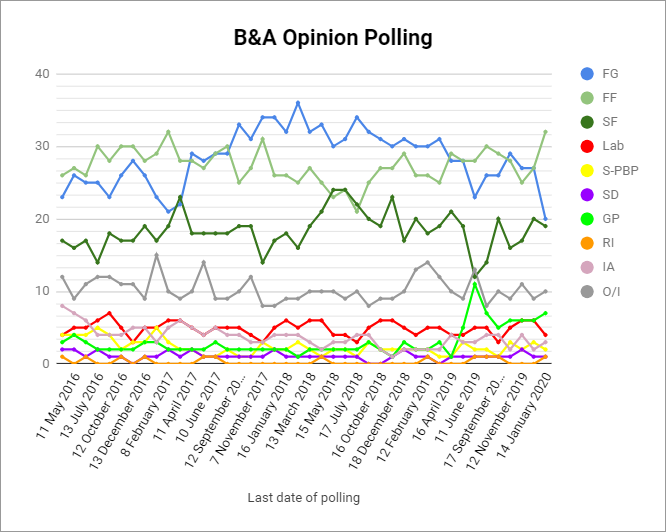 The left wing vote is splintered into a number of small parties, one of which has split even further, and even the loose alliances of independents have tended to fracture. The contest is therefore not so much between major left and right parties, but between two centre right parties and a host of small left wing parties and more populist independents. Only Sinn Fein and the Greens have a clear identity in the minds of most voters but for many, Sinn Fein's historic association with violence is still disqualifying.

The likely outcome is therefore a weak minority coalition government led by either Fine Gael or Fianna Fail with the Greens and/or Labour and some independents in tow. Most likely a second election will be required to yield a more decisive result before a more stable government can be formed. A grand coalition between Fine Gael and Fianna Fail is ruled out by both parties as it would undermine their rationale and identity as two centre right parties with relatively similar ideological dispositions.

A grand coalition would also result in Sinn Fein leading the opposition and mopping up all protest and dissident votes in any subsequent election and becoming a threat to the Fine Gael Fianna Fail duopoly. It is essential for the maintenance of the current political game that the electorate are persuaded that they have a genuine choice between Fine Gael and Fianna Fail. It is what Fintan O'Toole (and Sigmund Freud) calls "the narcissism of minor differences" and it keeps the political classes and the twitterati entertained.

Whether it will be any different this time around remains to be seen. Varadker has been a relatively popular leader but Ireland would not be Ireland if we didn't try to chop off the tall poppy at the knees. Only in times of crisis will we rally around one leader, and for most people there just isn't a crisis right now. Obviously that is not a perspective necessarily shared by the homeless, the sick waiting for a hospital bed, refugees, young people working hard and still unable to make the rent, or those concerned with social or climate change, but for many politics is an indulgence requiring little thought and only the most superficial engagement with the personalities and issues at stake.

So we will probably have a status quo election, with only minor variations in the relative strengths of the parties and a government with different personalities but pursuing policies more or less the same as the current one. I wait in hope to be proved wrong.

Prepare for the breakdown

Prepare for the breakdown

From a Fringe to a US Presidency - White Supremacy