Found in the Daily Mail, the remarkable odyssey of thousands of plastic ducks that have been travelling around the globe and the seven seas for 15 years.


The armada of 29,000 plastic yellow ducks, blue turtles and green frogs broke free from a cargo ship 15 years ago.


Thanks to their durability, they have actually been very useful to some people:


The toys have helped researchers to chart the great ocean currents because when they are spotted bobbing on the waves they are much more likely to be reported to the authorities than the floats which scientists normally use.


(I should probably have posted that in the open thread but I thought this was not serious enough...maybe)

Breaking news dug up from the diaries ~ whataboutbob

Again and again, one most heard discourse in french media is that one of the reason of bad management/decisions and (predatory) mergers, is that the capital is owned by foreign pension funds (or foreign individuals such as Albert Frere).

There are so many wrong or incomprehensible assumptions in this statement that I don't know where to start.

This weekend, among the real candidates posters (ie Sarkozy, Royal, Bayrou et al) I spotted a new poster for "Marc Maillard, Le candidat ultra-liberal" (no translation is needed, I suppose).

His "slogan" is mashup of both Sarkozy and Royal's formulas:
Ensemble tout est possible de changer fort
(roughly: "Together everything is possible as strong change", and yes it doesnt not really make sense in French either).

On his web site he is presented as a manager at Brother & Brother, a powerful multi-national firm, strongly devoted to its own profit growth.

His program is to "put France back to work", following the examples of "laboratory advanced countries such as Pakistan, South Korea or Vietnam".

It wouldn't probably be so funny if it did not sound as the programme that Sarkozy will want to implement but cannot openly acknowledge as his own.

An outside view from where I work (Paris, La Défense) 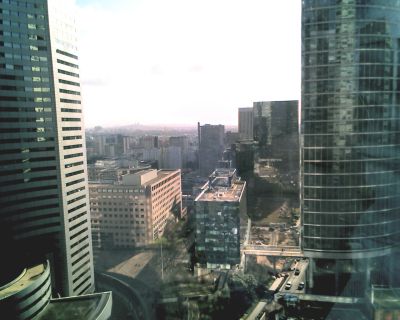 Your take on today's news media