This is the last part of a loose trilogy of shorts dealing in a sidelong way with the general economic and political malaise in Ireland. Hope you enjoy it. A link below the blurb will bring you to the previous installments.

'The injustice of time - rendered obsolete.'

Rain falls on the snow. The Contagion has taken hold. Ghosts from the old Dead Republic are emerging everywhere as the day of judgement approaches.

On Black Tuesday a guilt ridden political functionary runs from his job burying bodies in the city. He is tortured by voices of reproach as he journeys towards home. He recounts the history of his dealings with Fingers - a boss 'who made the old boss look like Mother Teresa'.

Meanwhile, back in the city, amid the spiraling negativity, Fingers and his acolytes lay the foundations for a new Easter Rising.

'Roscommon Death Trip' is the final installment of the 'Wallets Full of Blood' trilogy. Previous installments available at http://vimeo.com/user1319195/videos/page:2/sort:newest

U2 Can Believe In Tax Justice

Hot off the presses. Bono meets the Irish Minister for Finance outside his Department. Tax and those who don't pay it is on the agenda.

Voices From The Massive Dublin Protest

Here's a short video by a friend on the march which took place on Saturday in Dublin.

This was and has been promoted as an anti-public service pension levy march - but in reality it was an expression of anti-government and anti-banks feeling.

120,000 is the number that seems to have emerged as the number of marchers. This is pretty much the same as the number given for the other great march in Dublin of my adult lifetime - that being the Feb 15th 2003 march against the (then) upcoming invasion of Iraq.

A comprehensive set of links to local reaction is available here. Things are changing at a dizzying pace here at present.

'Zombies stalk an Undead Republic': Wallets full of Blood: Houses on the Moon

"An aristocracy in a republic is like a chicken whose head has been cut off; it may run about in a lively way, but in fact it is dead."
Nancy Mitford


Wallets Full of Blood (Houses on the Moon) from aaronrip on Vimeo.

Amidst the collapse of the Irish economy, the inhabitants of a rural hinterland begin to feel the touch of the dead hand of the housing market.

'Brains' is a developer and a 'big man' in politics. He's also the overseer of a particularly gory property price collapse on 'Fiddler's Green'. He reckons he can clean up as a result of the creeping zombification all around him but his plans take on a zero-sum logic of their own.

To save himself from the killing floor that results, 'Brains' attempts to turn his minions against each other but finds to his horror that control of the vicious cycle of blood and price drops has slipped from his greedy, grasping fingers.

His future (and everyone elses) lies in the cold dead hands of a different kind of market where the proles are making a killing for a change.

Related Link: Wallets Full Of Blood: Houses On The Moon' 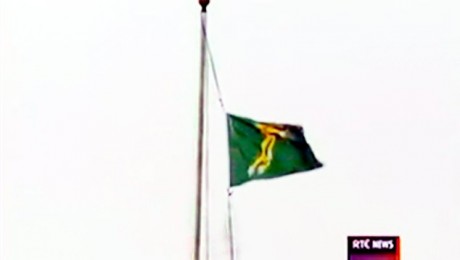 A meeting is due to take place later at a city centre location in Dublin to try to resolve the situation at Waterford Crystal.

Trade union officials from Waterford are travelling up this afternoon and will be meeting with David Begg, General Secretary of ICTU, Dermot McCarthy, secretary to the Taoiseach and other Government representatives.

The receiver, David Carson, has told the trade union officials he will attend that meeting.

Sleeping bags and blankets were brought in, as were food parcels, most of which were donated locally.

An estimated 2,000 people have attended a rally in support of the Waterford Crystal workers.

The occupation of the factory is continuing and a flag depicting the starry plough has been raised on the main flag pole at the Visitor Centre. Source

The Starry Plough - for those of you not familiar with it - is associated with the Irish Citizens Army who took part in the 1916 Rising in Ireland. They were led by celebrated trade union leader James Connolly.

Coincidentally this year in Ireland marks the centenary of the Irish Transport and General Workers Union founded by Connolly and Jim Larkin, a trade union leader forever associated with the Dublin Lockout of 1913.

Meanwhile we await a savage round of cutbacks owing to a massive housing bust! 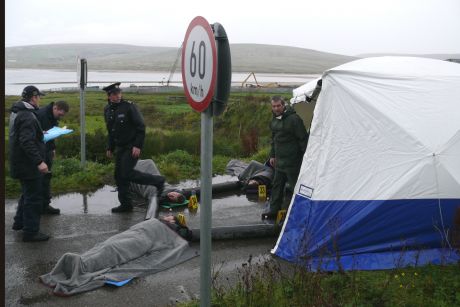 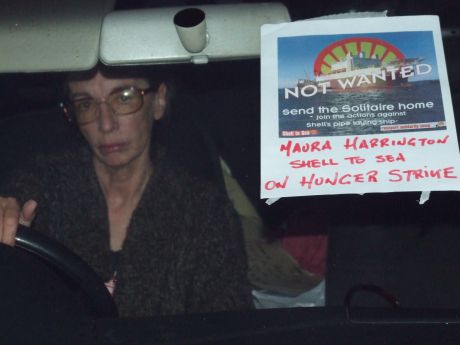 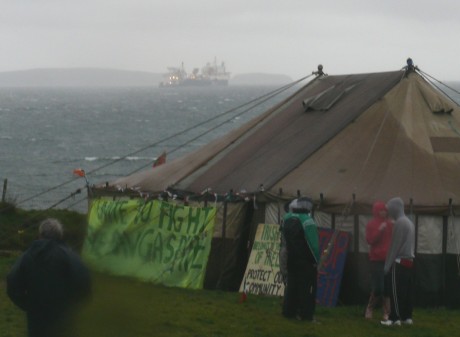 The first image is of some activists in a lockdown blocking the gates to the Shell compound on the edge of Broadhaven Bay in Mayo in the west of Ireland today. The second image is taken from the point of view of a camp of activists supporting the local community in Rossport. The community are opposing the laying of a pipeline which will carry untreated high pressure gas from the sea, through their area to the Shell compound. This story is now coming to a head as the community opposes the arrival of the 'Solitare' - the largest pipelaying ship in the world working for Shell. This ship, visible in the image from the camp, is being 'protected' from the activists and locals by a number of Irish Navy ships. Direct actions and arrests on the water are now taking place on an almost daily basis in the area . Some of these arrests are of local fishermen who are asserrting their rights to continue working on their traditional fishing grounds. Other arrests have been of members of small fleets of activists in small inflatables. The Solitare withdrew from the area today and cited damage to their equipment from an unknown cause. They say they will be back in 48 hours.

Despite ongoing police disruption the Climate Camp is up and running in Kingsnorth in Kent, UK. The protesters, as well as setting up a temporary sustainable ecological community, are intent on using non-violent direct action to close the power station on Saturday 9th August. Last year a similar camp succeeded in shutting down the headquarters of BAA, the owners of Heathrow Airport, for 24 hours using similar tactics. That protest was directed at the planned extention of Heathrow through the addition of a third runway.

A Friend Wrote this for Elsewhere But It's Very Real And Interesting. There Has Been A Huge Influx Of Polish Workers Into Ireland Since Accession of Poland To EU. 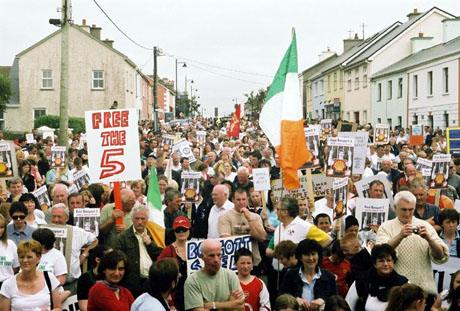 Background on this story and on the five Irishmen jailed at the behest of the Shell/Statoil/Marathon Oil conglomerate is here in a previous Daily Kos diary.

Your take on today's news media